Goal: Test whether down fill can be compressed to half it’s full loft and retain the same R-value.

Footnote conclusions: Down compressed down to 4″ has a significantly lower R-value than if it was allowed to expand to it’s full loft of 8″. Down compressed to 6″ has less R-value than it does at it’s full loft of 8″. R-value reduction appears to be roughly linear with loft reduction. Assuming a space is completely filled with down, loft seems to be the best metric for R-value. Density is important for control, but ultimately decreases the efficiency of the fill.

The test: A corrugated cardboard box was set on 4 layers of CCF foam on top of domestic carpeting to reduce heat lost through the bottom. A heating pad that maintains a consistent temperature (does not cycle on and off) was laid into the bottom of the box. The size of this pad is exactly the same as the bottom of the box. 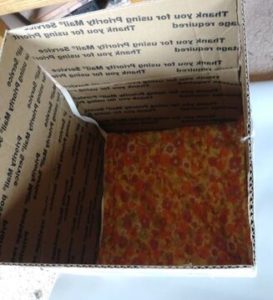 2.4 ounces of 850 fill power goose down was dumped into the box, over the heating pad. The fill was very carefully de-clumped and evenly distributed. 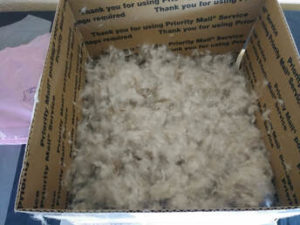 A remote thermometer was taped to a piece of corrugated cardboard that matched the size of the box and set on top of the down without compressing it more than was needed to eliminate empty space. The heating pad was turned on. Temperatures were recorded starting after 15 minutes. 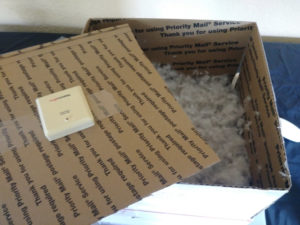 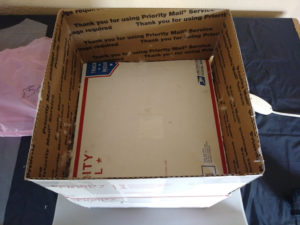 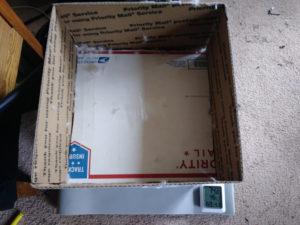 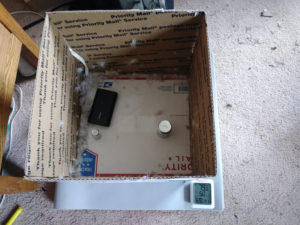 After 3 cycles between 8″ and 4″ a last decompression was made to 6″ from 8″. Temperature was recorded for 15 minutes. It decreased to 77.2f after 15 minutes. The 15 minute periods did not ever reach a plateau in temperature change and the differentials would likely be larger if allowed to sit longer.

Conclusions: It’s very clear that down fill has the most insulating potential at it’s maximum loft. The more vertical distance away from the heat source (your body) that is completely filled, the more R-value it has. The more you compress a given amount of fill, the less R-value it has.

Confirmation from nature: Some of the best testing has already been done over millions of years by evolution. Things that worked are seen in living examples. Things that didn’t, are not. Even better, we can look at the specific material in question here (down). It is used by it’s rightful owners (birds) in a very specific way. When it gets cold birds and mammals take a set amount of fur or feather and they lift them up, increasing loft/decreasing density. The colder it gets, the higher they lift them up and increase the loft/decrease the density. We humans do the same thing except we no longer have fur to lift (most of us). We call them goose bumps. Skin follicles tighten up, lifting the hairs/feathers. If birds feathers held the same insulating potential compressed, as they did fluffed up then the birds who didn’t waste calories lifting their feathers up would have easily beat out the ones who did. They didn’t. Birds that evolved to expend calories lifting their feathers up were able to conserve a much greater amount of calories in the form of significantly increased heat retention. If their feathers had the same insulating potential at 2.5x density, they would simply fluff them up to a certain point and stop. They don’t. They lift them higher and higher as the temperature drops. Lower and lower as the temperature rises. 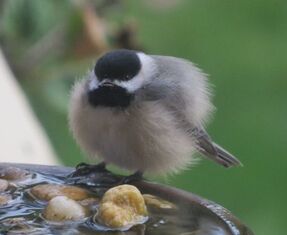 Tests you can do on your own: For anyone wanting to test this on their own, there is no need to set up an elaborate test like I have. If you have a freezer with frozen stuff in it and a down sleeping bag, you can do a pretty good test. Grab an ice pack or a bag of frozen veggies or something. Hold the frozen item against the inner shell on the inside of the sleeping bag. Hold your hand against the outer shell on the other side of where the frozen item is. Hold it there for a while and note the temperature. Now press down with your hand and compress the fill some. Stop and hold it there for a bit and note temperature. Do this repeatedly at different levels of compression. You will pretty easily feel that the more you compress the fill, the colder it will feel against your hand.
Rebuttals explained: If lower density has a higher R-value, why don’t we just leave an empty cavity? Because….convection. Once density is reduced to the point where convection can move heat energy through a cavity, or many small cavities, then this trend seen in the test is reversed. However, in this test, and within down garments and sleep systems, generally, the entire space is filled with down. Convection is not allowed to move heat energy through as long as the space is continuously filled. If the space is completely filled, lower density has a higher R-value per weight.

What about the popular test out there that suggests we can compress down up to 2.5 times it’s full loft density without losing any R-value? I have looked through the data in that test many times over the years and here is my interpretation. I don’t believe this testing to be in error. It’s simply dealing with an entirely different scenario. It appears to me that the data in that test has been widely mis-interpreted through extrapolation. The findings indicate that we can stuff more and more down into a given chamber and the R-value will generally “increase” until you get to 2.5 times, at which point it stops “increasing”. It does not say that that quantity of fill will be as warm as if it was in a chamber that allowed full loft. In fact, I think it shows the opposite. Take that 2.5x quantity and allow full loft and it’s much warmer than it is stuffed to 2.5x density. This is the data point that is relevant to compressing a given amount of down in a jacket or sleep system. It appears to me to show the same thing that my test here shows. More compression – less R-value. So, yes, you can stuff more and more into a given chamber and it will increase in R-value but it will not increase at the same rate as if you were to increase the loft. There are many people who have tried to set the record straight and their comments can be seen around the threads relating to this, but ​I think folks are very eager to believe they can stuff their puffy under another jacket and it’ll still be just as warm. It simply isn’t the case. You can wear 2 jackets and it’ll be warmer than just one of them no matter what, but it won’t be the full loft warmth of both added together unless the outer one is big enough to allow the inner one to fully expand.

In defense of higher density: While the efficiency of down decreases with compression, it doesn’t mean there aren’t really great reasons for higher density. In a lab setting allowing down to fully loft as high as it can is the warmest it will be. However, when you put that test in the field, there are many other factors to take into account. For instance, a chamber filled only to it’s lowest possible density won’t have enough density to keep the fill from shifting around, leaving big gaps in the chamber. While the chamber filled to the highest loft possible is warmest, in the field if that chamber ends up having massive empty spots, it’ll end up being much colder. Additionally, if the fill in a minimally filled chamber gets a little moist and loses some of it’s loft, there isn’t any density to make up for it. There is a sweet spot where you achieve a density that is adequate for the amount of control you want, without decreasing the efficiency of the fill too much. This sweet spot is likely variable for different builders, different users, and different situations. I tend to like to go fairly dense. Dense enough to pretty much eliminate any possible shifting in any likely scenario on the trail. For me this is around 160% over “just enough to fill the space”. In my eyes, once I’ve found that point, going any denser is just decreasing the efficiency of your expensive down fill.

An oversight that I made in V1 was brought to my attention and some improvements were suggested so I ran the test again. The oversight in V1 was that 2.4oz of down has enough mass to compress itself so I was not actually starting at full loft. Keep in mind that a down item also does not start at zero. A sleep system might be anywhere from 20% to 80% overstuffed to start. A sewn through jacket might be sitting at 150% with no added compression. However, for consistency in V2 I reduced the total amount of to 1.016oz of 850fp down. This amount filled 864ci, as rated, without compressing itself at all to a depth in the box of 6″. For V2 I also added a thermometer under the down fill, against the heating pad so that I could measure the temperature change there too.

Goal: Test whether down fill can be compressed to half it’s full loft and retain the same R-value.

The second test: was performed much the same way with a few more precautions. The down was dumped in and carefully de clumped. This time it was noted that the down achieved it’s rated “fully lofted” volume at 6″. The cardboard insert was set in, except this time it was supported exactly at 6″ so that the weight of the insert and sensor did not compress the down at all. A second thermometer was inserted into the bottom of the box so that the probe sat against the heating pad near the center of the box. I waited 20min and recorded the temperature on top and the temperature on the bottom. Then I compressed the down to a height of 3″ and waited 15min. I then recorded those temperatures again. This was repeated 3 times. With each compression cycle to 3″ the temperatures would rise in the top and fall in the bottom. With each decompression cycle to 6″ the temperatures would fall in the top and rise in the bottom.

​The 15 minute periods did not ever reach a plateau in temperature change and the differentials would likely be larger if allowed to sit longer.