The problem is that every one of those lines is a cold spot, with zero insulation. Furthermore, the narrower the chambers between the lines, the less that fill is able to loft up. So more cold spots and less insulation from the fill. It is true that as the total fill amount goes lower, you need narrower chambers to control it. You need narrower chambers and more lines to control light fill but can get away with wider chambers and fewer lines with heavier fill amounts. However, the industry today is most often putting out jackets with twice as many chambers as you would really need to control the fill amount….at least. Sometimes more.

Over the years I’ve done a bunch of testing on this. Swinging both towards narrower chambers/more control and to wider chambers/less control. Interestingly, even in my most extreme swings toward narrower, I’ve never come close to approaching the density of lines in most mass market jackets. Mostly because it’s soooo excessive, but also because each line has to be sewn. It’s labor intensive. Not only is it detrimental to performance, but it also costs more. I don’t know. These mass market jackets probably just go into a computerized machine that sews like 20 lines at once or something.

I have come to really prefer the widest spacing I can get away with. On multiple occasions, I have built essentially the same jacket back to back. Same calculations. Same fill amounts. Only one with 3″ spacing and the other with 6″ spacing. The difference in R-value is astounding. The level of control is more than adequate in the 6″ spaced jacket. No shifting or open spots at all. 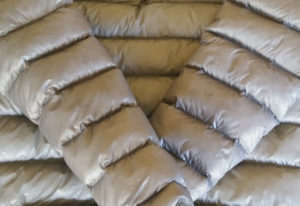 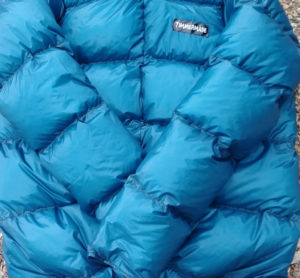 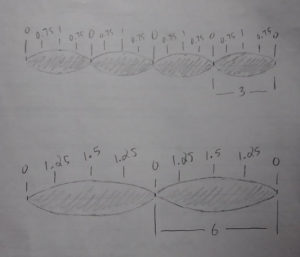 Above you can see the two designs. They both have the same exact amount of down fill in them but different chamber width and sew line spacing. The 3″ one on top has 5 sewn through spots that are 0 loft and the maximum loft of the chamber between lines is around 1″. The one on the bottom has only 3 sewn through 0 loft spots and a max loft of around 1.5″. The 3″ spacing jacket has an average loft through this cross section of .59″ whereas the 6″ spacing jacket has an average loft of .89″. The 6″ spaced jacket has in average of 1.5x more loft in just this 12″ cross section and the amount of loft is the highest contributing factor to down warmth. Keep in mind, this is only an isolated cross section of these garments. In reality, this difference in loft and heat retention is happening across every square inch of these jackets.

An argument could be made that the 6″ spaced jacket has a lower density and therefor is more likely to have some shifting if conditions are less than ideal. To that I ask, “Would you rather risk that a gap might open up from shifting, causing a small cold spot, or build a jacket that has twice as many cold spot built in, right out of the box, at all times?”

Another nod to lower density here is that it’s less likely to be as effected by compression. When you compress down, it loses R-value but at lower densities the change is linear. So a marginal compression is a marginal loss in R-value. At higher densities, the curve gets progressive and small amounts of additional compression can result in big losses in R-value. Granted the higher density is more resistant to being compressed.