I’ve made dozens of packs for myself over the years and keep graduating to further refinement. A few of my primary goals have been bounce-free running performance, back ventilation, and better weight distribution. They are all interrelated but the running aspect is the one that really throws a wrench in the works. With a traditional pack you can get weight distribution by using a hip belt that transfers some of the weight onto your hips. However, when you try to run your hips move opposite of your upper body. As your body bounces in a running stride, you throw your hip and leg down to propel yourself while you throw your arm and upper body upward for momentum as you jump from foot to foot. The upward motion of your upper body throws your pack up off your hip, just as your hip is thrusting downward. You land and thrust upward again just as your pack is falling back onto your shoulders and you get this awkward bounce that is applying forces that are opposite to your effort. The fact that the entire mass of everything is cantilevered off your back in one spot just further amplifies this movement.

So your upper body while running is all bouncy, while your hip motion counteracts this bounce and is actually much more stable. It moves down when you bounce up, smoothing out the motion. Seems like it’s actually a great place to carry weight, just not connected to your upper body through a pack. This realization lead me into multiple variations of hip packs designed to move some weight out of my backpack and onto my hips. The first hip packs I built were just retired hip belts off packs that I abandoned. I actually still use one of those today for running but I found myself wanting real storage for thru hiking and I eventually progressed to moving my entire multi day food load and daily use stuff out of my back pack and onto my hips. This usually translates to carrying about half of my total load on my hip with hip packs that are separate from my backpack. That first design was a hip pack that ran down the thigh. I called them thunder thighs. 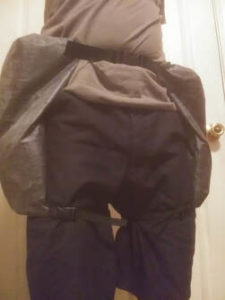 This is actually version 3 of these but they would carry a ton of weight REALLY well. I could throw 6 liters of water in them and go do a full sprint no problem. No bounce, and the weight really didn’t feel that noticeable. I mean, more weight is more weight and you have to move all of it up a hill, but as far as the sensation of that weight pressing down on you, having it on my hips didn’t feel too bad. The problem with these was that they were loud. As I moved my legs the material wrinkled and flexed and was a source of constant noise.

​There were some versions in between, but eventually I moved away from those toward these… 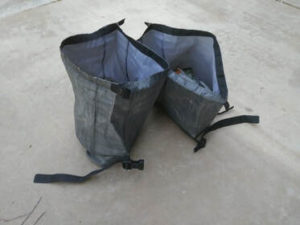 These roll top hip packs can be used individually as a lumber pack or together for dual hip packs. As dual packs they can be oriented on the sides, or oriented front and rear. Each bag only weighs about 3 ounces. I can easily run with 10 – 15lbs of food and stuff in them. There is no bounce because they are secured against the hips which stay more stable while running. The weight is all transferred to big bones and muscles so you don’t feel it as much as you do when it’s pressing down on your shoulders. Also, since my entire food load is right there on my hips, I can just spin the side I want to the front and have a walking picnic with super easy access to everything! 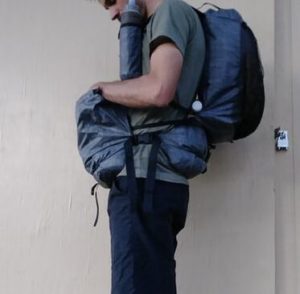 Using the vertical cinch straps on the hip packs I can also store some items like trekking poles, extra water bottles, or whatever. 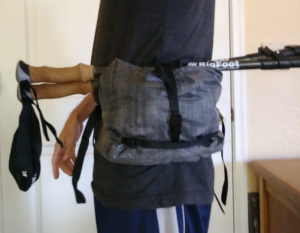 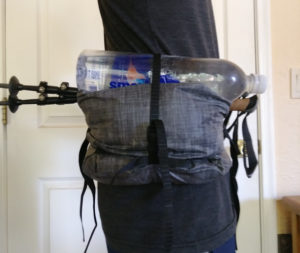 Having moved all my food onto my hips leaves water and base load. For this I built a small pack with water in the front. The actual pack is only carrying my SUL base load so I don’t really need that much space. This pack has a total of around 25 liters of space. About 16 liters in the large main rolltop with at least another 9L added (probably more) with the large mesh pocket and front shoulder strap pockets. It’s often more than I really need for just a base load, but it allows me to store my insulation a little less compressed. I designed it sorta like a running pack with some extra features to make it totally bounce free. It weighs about 5 and a half ounces. 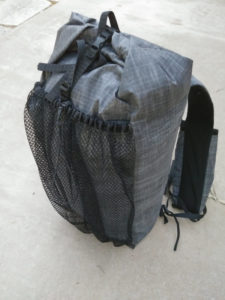 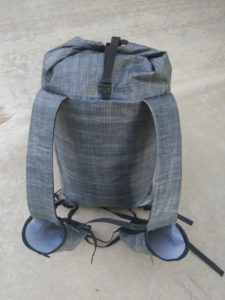 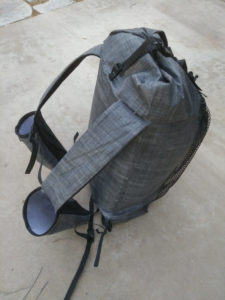 It rides up high, on the upper back, like many running vest style packs. Since it’s up high I left off side pockets that wouldn’t be accessible. I have ample accessible storage in my hip packs. The two shoulder strap pockets can carry up to 1 liter of water each. It has two sternum straps that allow me to adjust the angle of the shoulder straps and bottles. It has a third waist belt style strap that runs downward toward my waist. This strap cinches the pack down so that there is absolutely no bounce. It can simply be run to the waist, or run around the hip pack strap to provide something to pull down against. This is the most bounce free pack I’ve ever had, of any kind. I rarely have more than 5lbs in it, but I have loaded it down with 10 – 15lbs and run with it. It doesn’t move at all.

Now to the issue of back ventilation. Ultralight, frameless packs generally cause a lot of back sweating, which makes sense. They put an impermeable fabric, with like a foot of various forms of insulation behind it, right against your back with no airflow. Many say “Well so what. My back sweats.” and that’s fine. Yeah, it isn’t hurting anything…….except….in my mind, I don’t want to carry much more water than I really need to, since it’s pretty heavy. So I want the sweating I do to be effective as possible and we tend to do a lot of sweating through our backs to cool down our core. If I have insulated plastic fabric against my back it causes sweating, but that sweat doesn’t do anything. It can’t evaporate and cool me down. So my back stays hot, which triggers more sweating that does nothing and it just continues. It adds up to a lot of water that is just going out for no benefit, which means I get dehydrated quicker and need to carry more water.
One advantage to being able to use a really small pack is that it covers a smaller portion of my back. My lower back has a good amount of open real estate for evaporative cooling and the backpack is fairly small and narrow so there is less space covered up top too. However, even that small space covered by impermeable fabric and lots of insulation spurs a lot of sweating. So I also employ a little trick that I’ve used on many different packs to get ventilation without any added frames or padding. I get additional water storage as a side benefit too. I take one or two liter smartwater bottles and slide them between my back and the pack so that the top and bottom of the bottles are supported by the lower strap attachment point of the pack on each side. 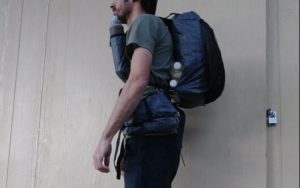 This pushes the pack off my back and suspends it by the small points of the water bottles with lots of airflow around them. It’s also really nice when you fill up with some nice cool stream water. If I am just walking and not running at all, I can undo the waist strap and this really lifts the pack off my back so that the only portion touching is the very top where the shoulder straps attach. If I am running I keep the waist strap cinched and the whole pack and two liters of water stays completely bounce free with pretty decent ventilation around the bottles.

I typically don’t carry water in both the front pockets and on my back because I want to maintain access to the pack. So I’ll move the bottles from the front to the back when I’m cruising and want ventilation and then when I want to get into the pack I can move the bottles into the front pockets so I can move the pack around to get into. Or often I’ll carry one bottle in front and one in back to provide ventilation.

All of these bags are built with Liteskin fabric, which is a fairly light but durable laminate. All the seams are sealed and closures are all roll top so everything is totally waterproof, with the exception of the mesh rear pocket. The total weight for bags is just 11.6 ounces.

4 thoughts on “My Packs/Bags”