Skip to content
My go-to right now is a Timmermade Thrush false bottom bag. The false bottom bag is really the way to go for me. I tend to run fairly cold, especially when inactive. I have to build a quilt wide in order to limit the drafts that come in when I toss and turn, whereas a false bottom I can use a much narrower and lighter insulated area and still end up with a roomy and warmer interior with no drafts. I like to curl up in fetal position to conserve warmth and the FB bag allows me to take up the wide space without the edges pulling up. I never have any issue venting in warmer weather, mostly just through the top, but if it’s really warm, I just get out of the bag and drape it over me as needed. My personal Thrush is the same design as the normal one, only it’s built in a trimmed down size, which allowed me to build a 30f bag that I can reasonably take down to 20f that only weighs 14oz. 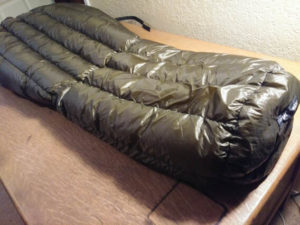 The top of the bag is cut smaller than normal. My shoulders are about 42″ in circumference and the top of this bag is cut at 45″. Basically just enough room to get in. When I built it, I thought that I could have gone tighter, and technically I could, but this feels tighter to get in than I thought it would. 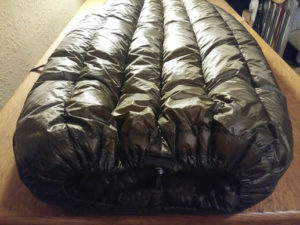 The torso area quickly widens up to 64″ in circumference. This is large enough for me to bring both knees up into fetal position, which is a position I use to conserve warmth. When you lay out straight, your limbs act as big radiators with lots of surface area exposed to the air where it is lost. When you curl up in a ball your body is exposing much less surface area to the air and instead places it against other parts of your body so the warmth stays within. Pretty much every living thing on our planet uses this strategy and it’s in our own evolutionary history. When we humans get cold we instinctively curl up. I know we live in climate control and have gotten used to sleeping sprawled out, but it is a bit funny that we often don’t use the basic, natural method for staying warm in cold weather when we are out in cold weather. Having a bag sized large enough to accommodate this position is essential to me. If I don’t actually sleep through the night like that, I at least need it to warm up when I first get in, or if I get cold at some point in the morning. I also sometimes use this large area to lay or sit cross legged, mostly before going to sleep. I often have cold feet. I can function through the day just fine, even if they are really cold, but I simply cannot fall asleep while they are in “cold mode”. To remedy that I lay for a while with a jacket on and my legs crossed in the torso part of the bag with each foot tucked into the opposite leg. This is like a super heater for my feet and once I get them “jump started” they stay nice and warm through the night in the sleeping bag. 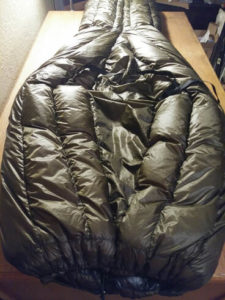 From that wide torso, the bag narrows down, like a normal Thrush, to a straight footbox from the knee down, only I built it smaller on my bag. I took this down to 35″ for the bottom third of the bag, instead of the usual 38″ or 40″. I came up with this number by taking my foot length and figuring out what the smallest circle it could fit into would be. I thought 35″ was going to be the very minimum and feel pretty tight. It actually feels quite roomy and I’m sure I could have gone down to at least 32″. Maybe less. 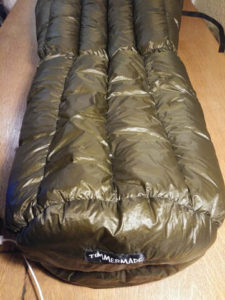 It has a sewn footbox, as it’s lighter than the drawcord footbox. While it can be nice to open up the footbox and walk around wearing your sleep system, I decided in favor of lighter weight on this one. The false bottom has the usual removable pad strap, which I don’t use very often, but typically bring with me in case I want to. Sometimes I’m on an uneven surface or whatever and just want the bag strapped down to the pad to keep things in place. It has the usual dense 1600% overstuffed chambers with 950 fill power DWR down and the same large differential cut as the normal Thrush so that I can’t accidentally compress the fill when pressing against the shell. This is a very important feature, in general, but especially when using sleeping positions like fetal that take up a wide girth and often press against the shell. With the large diff cut, the load from my pressing against the bag is taken up by the inner shell and all the down remains fully lofted. In fact, I often use the inner shell tension to hold myself in fetal position.

As always, I use a Waterbear balaclava with this bag. These days it’s a Climashield SUL Waterbear. It’s only 1.5 ounces with the full breathing tube. I choose this one because, being Climashield, it works well as part of the sleep system but also works great during the day. Climashield holds it’s loft in wet/moist/sweaty conditions so I don’t have to worry about exposing down fill to the elements that I’m depending on for my sleep system. 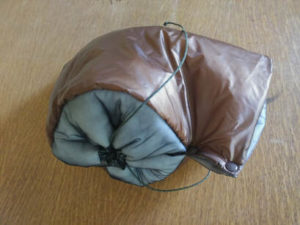